Beyond the green line

Get ready to become the eco-warrior you have always wanted to be and understand the facts around environmental issues through delightful and informative stories and insight. In Beyond The Green Line we break down big topics like sustainability and environmental conservation into bite-size chunks, by getting exclusive insights into the minds of industry experts, leading change-makers and everyday activists to take you on a weekly inspiration, information and laughter-filled journey.

Listen To the Lastest Episodes

The Regeneration of Pasture Cropping: An Integrated Approach To Grain And Pasture Production
byMoss Environmental

On today’s episode of Beyond the Green Line, Shonelle Gleeson-Willey talks with the inventor of pasture cropping: Colin Seis.

Colin oversees 3,500 Merino sheep on his property in the Central Tablelands of New South Wales, where he also grows cereal crops and natives grasses. He and his son, Nick, breed Kelpie dogs on the land as well.

Collin has received a Conservation Farmer of the Year Award, Australian Carbon Farmer of the Year, NSW Regional Achievement and Community Award, and was recently called one of the top 6 most influential farmers in the world by the Melbourne Weekly Times.

His 2,000 acre plot is called Winona, and it has a widespread reputation for holding up amazingly during drought. Its predominant soils include coarse and fine sands derived from granite, which are not considered highly fertile, but he shares with us how pasture cropping is a way of working alongside nature instead of against it, resulting in a more robust and resilient farm.

Colin describes pasture cropping as the way that crops were originally cultivated in ancient times: not by killing every other plant in the area, but by sewing crops in with native grasses and other plants, so that competing roots can improve a crop’s vitality, water retention and wind protection.

Colin developed the approach of pasture cropping along with a neighbor farmer after a devastating bush fire in 1979. Today, the land can now officially be called restored grassland, and Colin can be found teaching his regenerative methods to farmers around the world through his online “Smart Soil” classes.

He educates us that gross margin (profit) is greater in a pasture cropping, because multiple products are being harvested. The crops are about the same yield, just slightly more variable. But native grass seed is harvested in addition, increasing profits.

Fertilizer is still used on Winona, but has been reduced over time as sheep grazing increasingly becomes a type of natural mulching and fertilizing.

Collin recounts that in the early years, he was ostracized by the industry for attempting to sell combined crops, and had to have self-belief and confidence to continue. He notes that his first supporters were ecologists, because they had understanding of diverse systems.

He discloses that one of the biggest advantages of pasture cropping is the stimulation and germination of dormant seed – even seed that has been sitting for decades. This can be a significant factor in restoring grasslands.

Soil carbon levels have increased over time at Colin’s farm, and current measurements are detecting increased carbon as far down as a meter. Colin shares that this is due to plant diversification, and bigger perennial plants with deeper roots.

We know you’ll be encouraged to hear from one of the legends in regenerative agriculture on this episode.

And take a look at his classes:
www.SmartSoilEdu.com 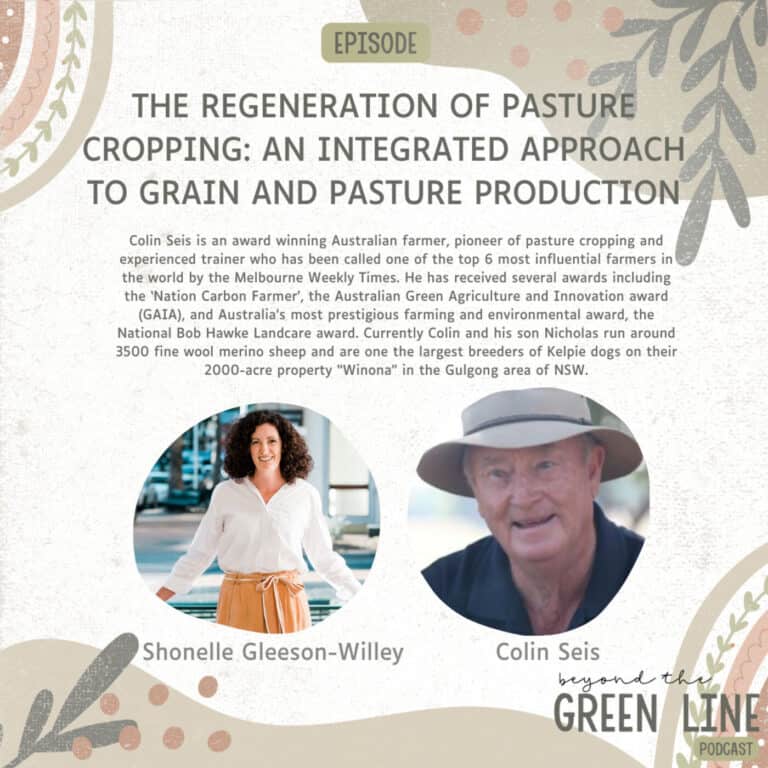 The Regeneration of Pasture Cropping: An Integrated Approach To Grain And Pasture Production
On today’s episode of Beyond the Green Line, Shonelle Gleeson-Willey talks with the inventor of pasture cropping: Colin [...]
Moss Environmental
Episode play icon 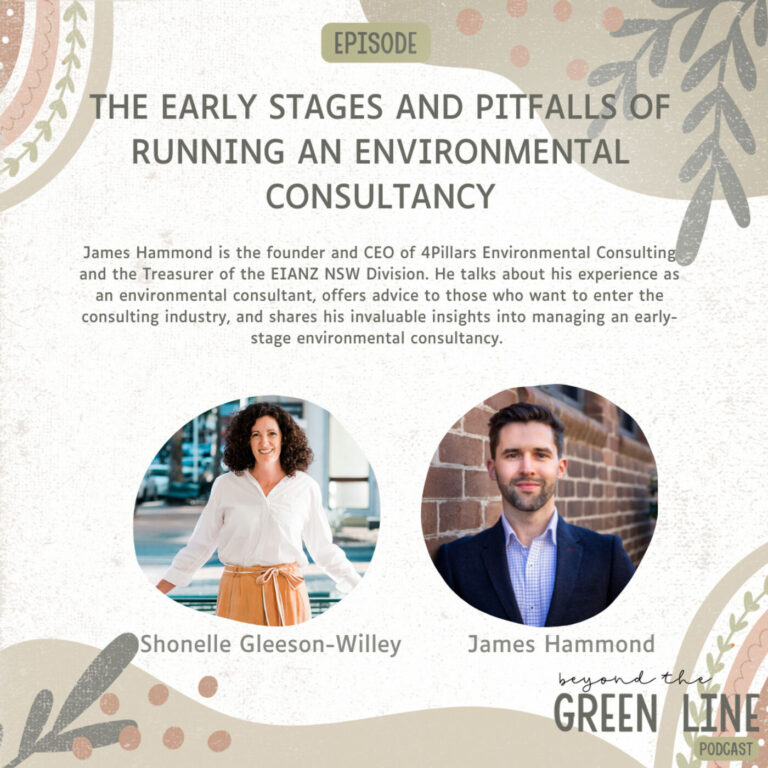 The Early Stages and Pitfalls of Running An Environmental Consultancy
Today on Beyond the Green Line, Shonelle Gleeson-Willey talks with James Hammond, founder and CEO of 4Pillars Environmental [...]
Moss Environmental
Episode play icon 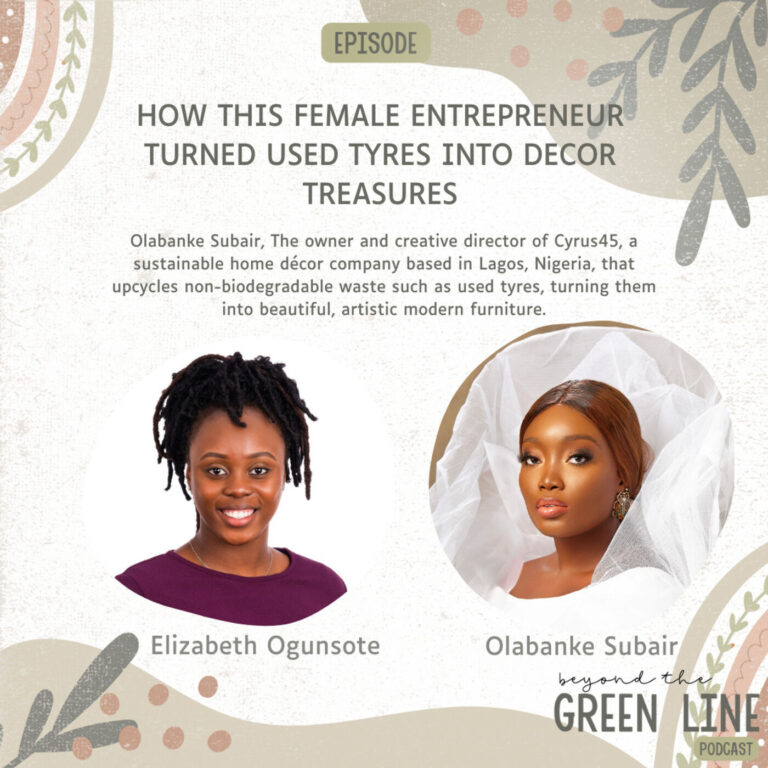 How This Female Entrepreneur Turned Used Tyres Into Decor Treasures
Today’s episode of Beyond the Green Line is hosted by one of our key consultants, Elizabeth Ogunsote. Elizabeth [...]
Moss Environmental
Episode play icon 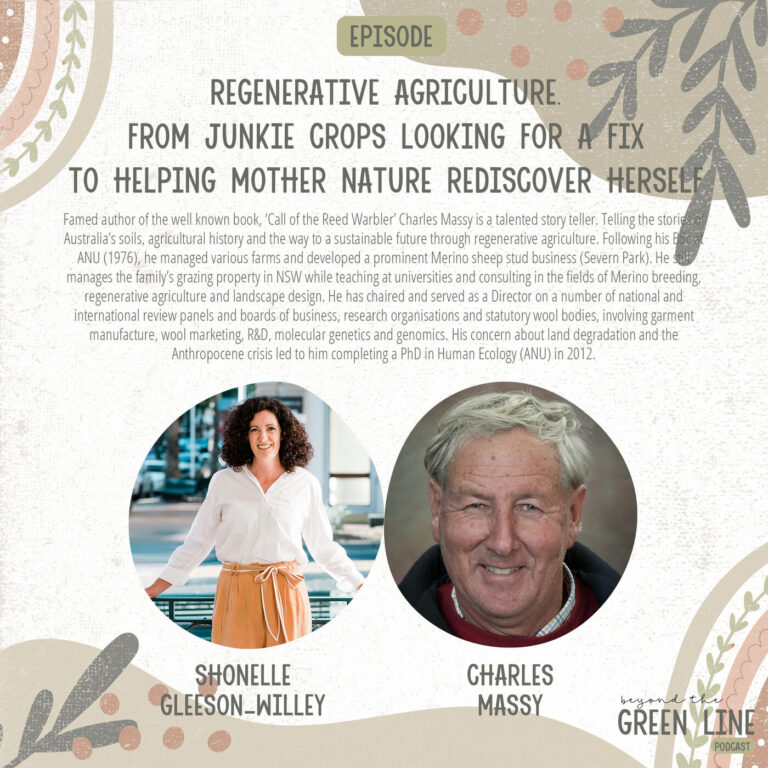 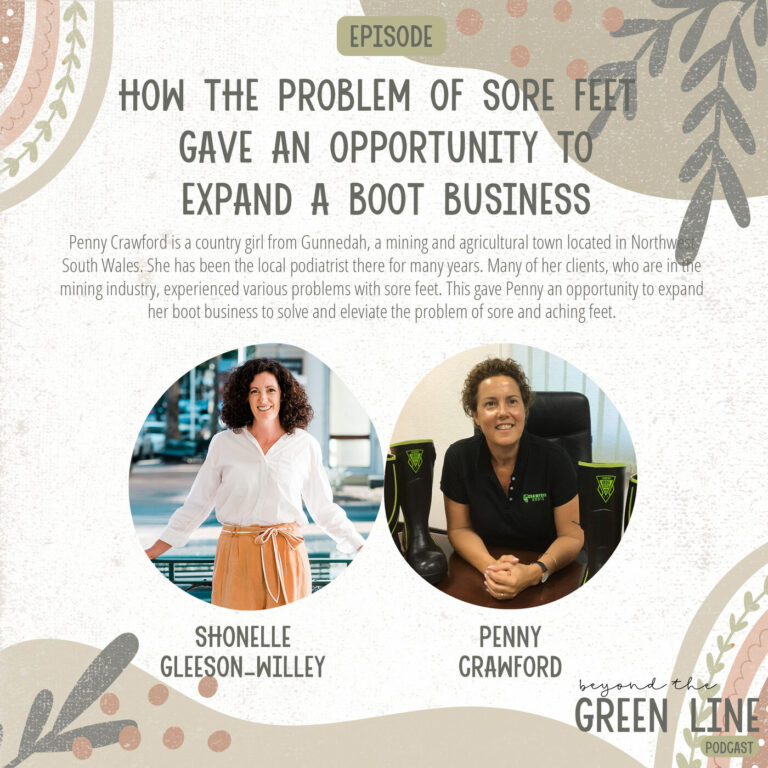 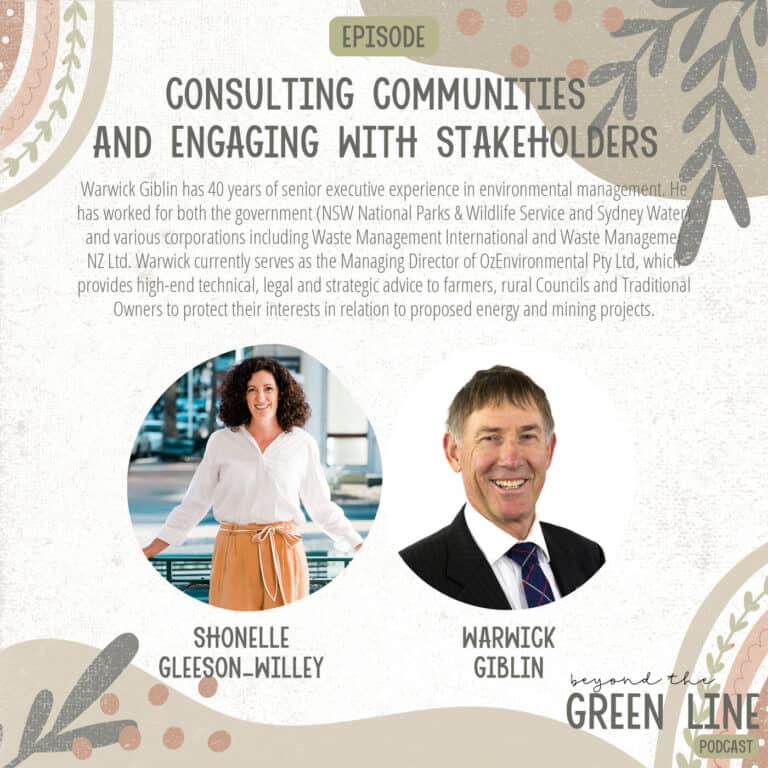 Consulting Communities And Engaging With Stakeholders
On today’s episode of Beyond the Green Line, Shonelle Gleeson-Willey chats with Warwick Giblin, a veteran in the [...]
Moss Environmental
Episode play icon 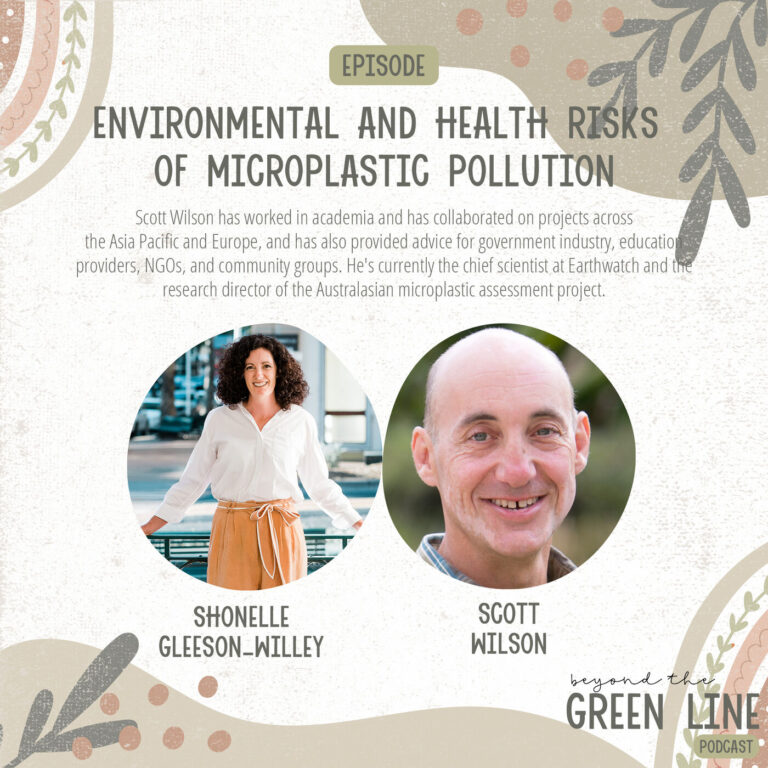 Environmental And Health Risks Of Microplastic Pollution
In this episode of Beyond the Green Line, Shonelle Gleeson-Willey talks with Dr Scott Wilson Chief Scientist at [...]
Moss Environmental
Episode play icon 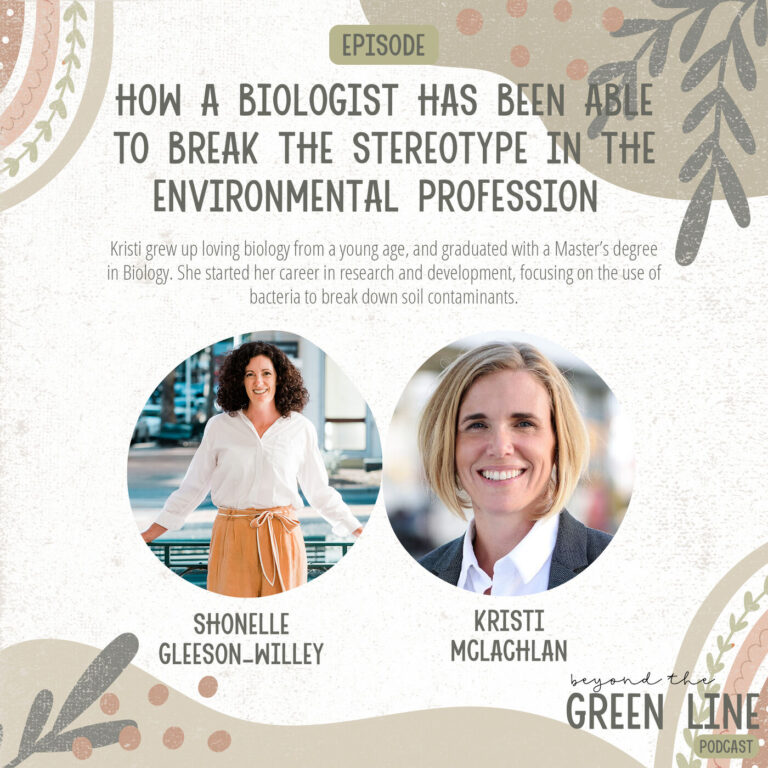 How a Biologist Has Been Able To Break The Stereotype In The Environmental Profession
We’ve all heard of the glass ceiling: the idea that there are barriers to women achieving executive and [...]
Moss Environmental
Episode play icon 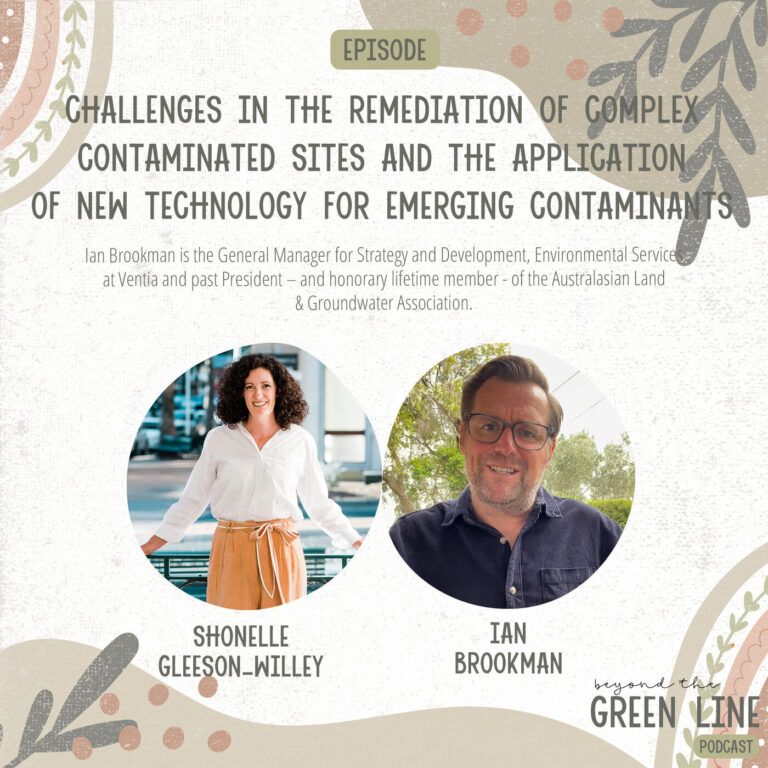 Challenges In the Remediation Of Complex Contaminated Sites And The Application Of New Technology For Emerging Contaminants
Today’s guest possesses a gift that we all can benefit from: he loves bringing clarity to complex problems. [...]
Moss Environmental
Search Results placeholder

Want to Be A Guest On Beyond The Green Line?

We are always looking for guests that have inspirational and entertaining stories to share with our listeners. If this sounds like you, fill out this quick application form. We will be in touch within a few days to talk about next steps.

Apply to be a podcast guest

Stay up to date with episodes, announcements and podcast news. Sign up to get notifications sent straight to your inbox. 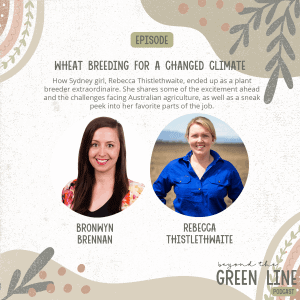 Wheat Breeding For A Changed Climate – with Dr Rebecca Thistlethwaite 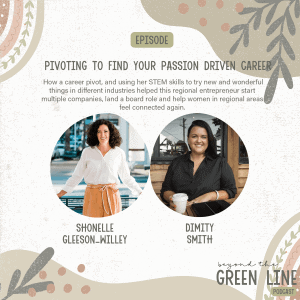 Pivoting To Find Your Passion-Driven Career – with Dimity Smith 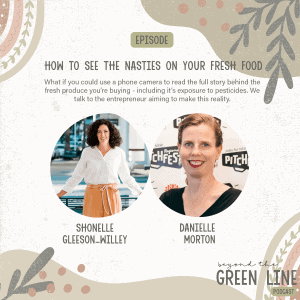 How To See The Nasties On Your Fresh Food

We can help to ensure that all of the required regulations are met and that your environmental impact is minimised. See what services we can offer your project.

Browse through a selection of our completed projects to see how we have helped past clients minimise their environmental impact while complying with regulations.